Pancakes! The staple breakfast food found in diners all around the world! And also in the woods! I give to you a basic yet incredibly customizable pancake batter recipe as well as 3 different toppings to start you on your way!

You can drag all the ingredients out into nature with you if you want but this batter keeps very well pre-made at home and stored in your cooler.

Mix the dry ingredients together in one bowl and the wet in another. Add the dry to the wet, and stir to combine. Don’t over mix. Store in a plastic container or heavy duty resealable bag.

Cooking pancakes is really easy. Heat a pan with a bit of butter over your fire. Pour some of the batter into the pan. Little bubbles will start to form and pop as the batter cooks. You’ll know it’s time to add toppings and flip the pancake when the bubbles pop a hole remains.

And now for the toppings! My favourite topping is banana slices. It’s super simple and a little bit sweet. Squish them into the cooking pancake and flip it over. They’ll caramelize a little bit as the rest of the pancake cooks. So good! 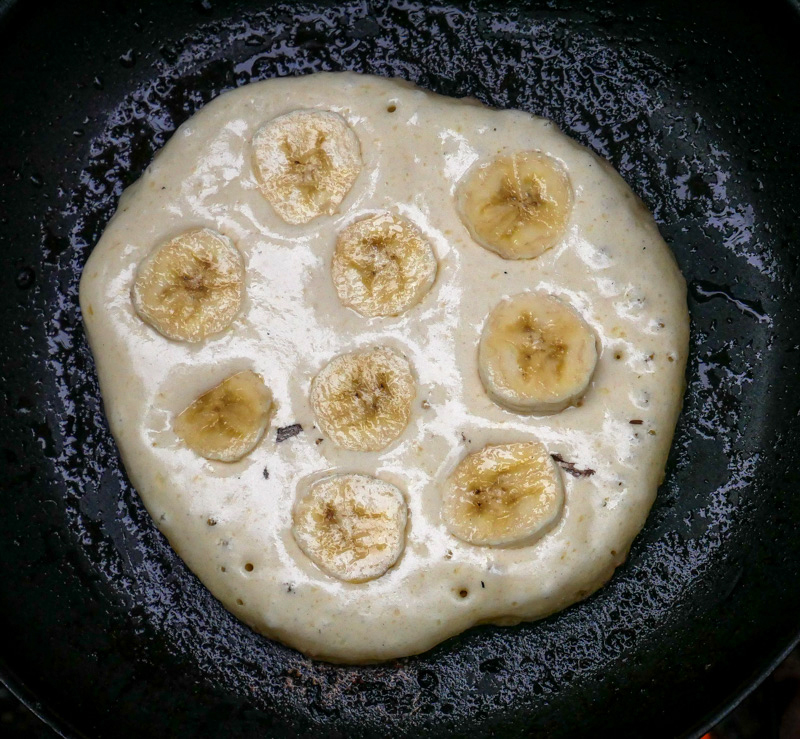 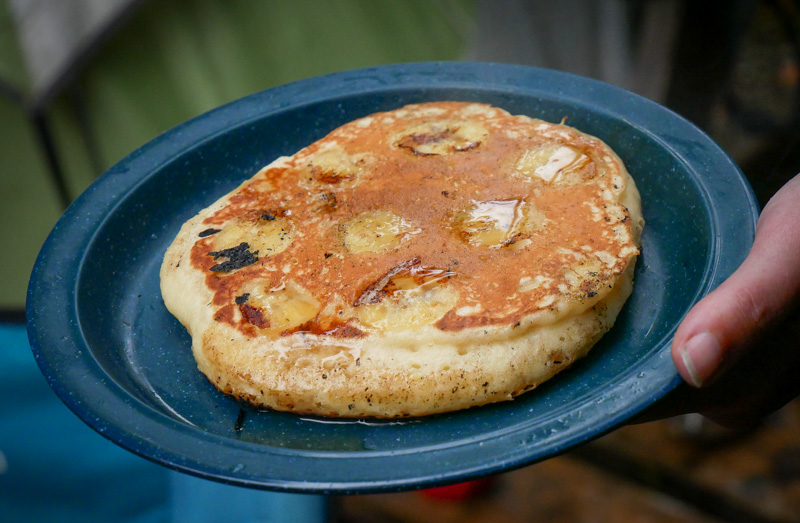 A fun one is cinnamon swirl. They taste like cinnamon buns for breakfast! Pre-make the cinnamon sugar mix at home. Melt some butter and combine it with brown sugar and cinnamon. Store it in a plastic squeeze bottle until breakfast time.  Now, the mixture will need to be remelted before you can squeeze it out. Put the bottle in a pot of hot water and after a few minutes it should be ready to go. Squeeze out a spiral and then flip the pancake to finish it. 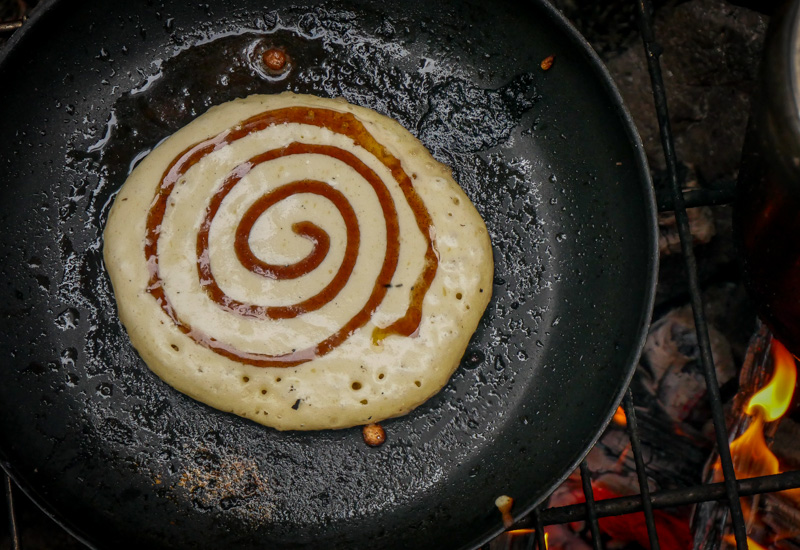 The spiral mostly disappears once it’s cooked but the flavour is still there and still great! 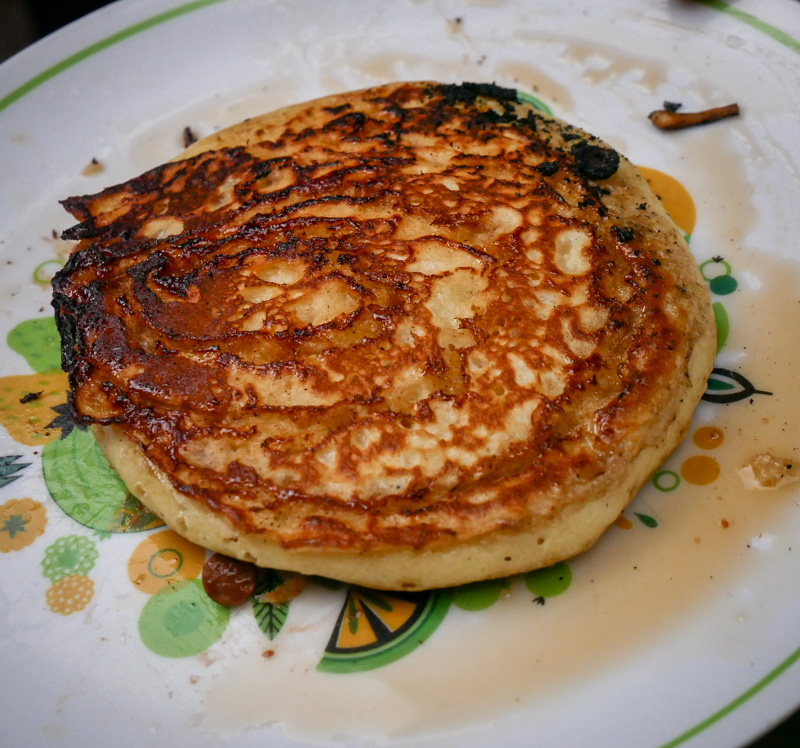 Of course adding some chocolate chips is always a crowd, and kid pleaser. Just sprinkle some on top of the half cooked pancake, flip and finish. 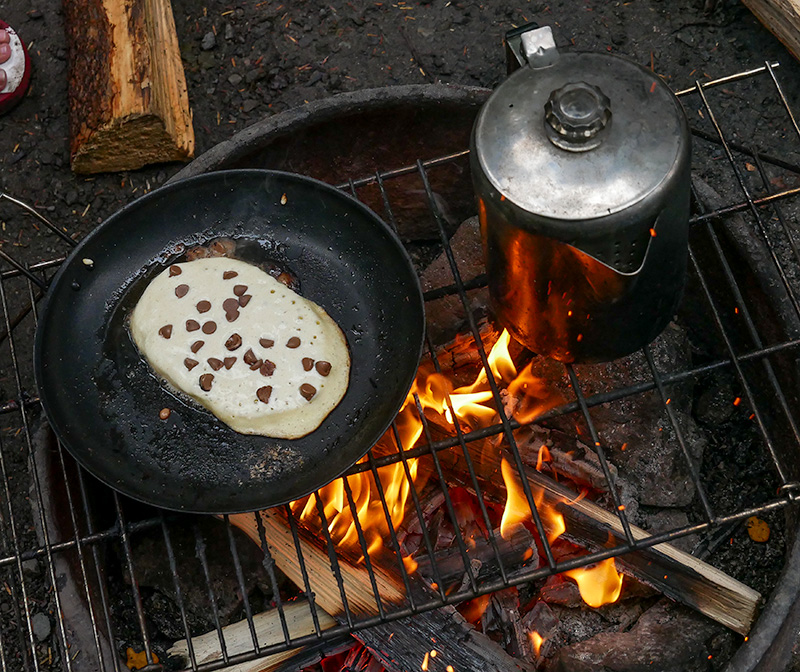 Serve topped with some more butter and a generous drizzle of maple syrup! Whatever toppings you decide to go for, pancakes are a great way to get your camp day started. 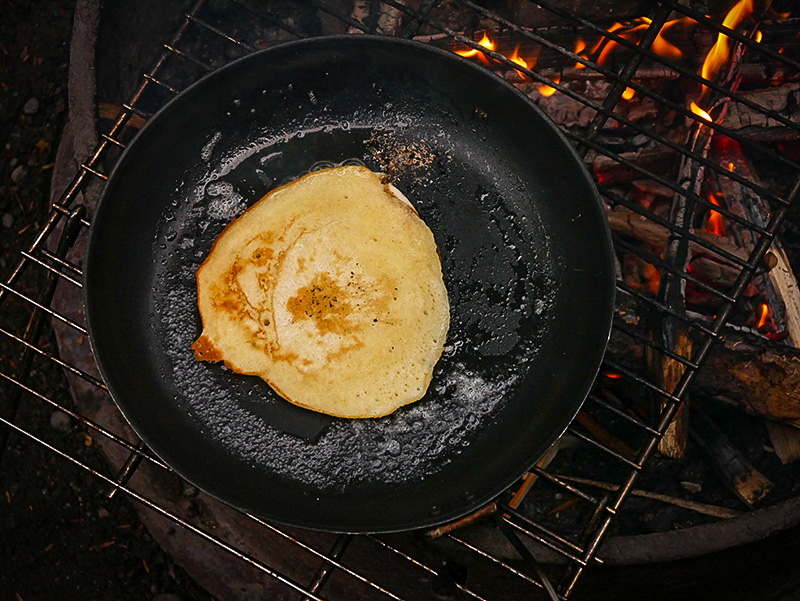 Print Recipe
Pancakes 3 Ways
A basic batter and 3 ways to customize it! Cook them over a fire and it's a great way to start your day. 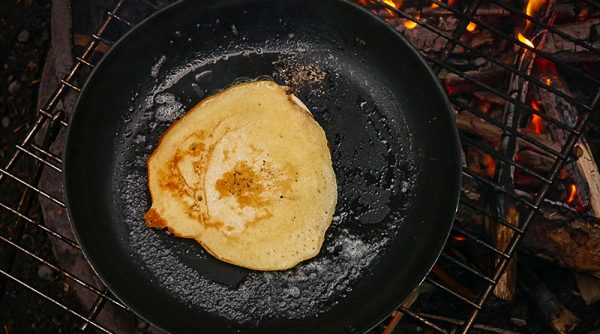 We've always got a pot of hot water going for coffee or tea in the morning. We used that to melt the cinnamon sugar mix.

If you don't want to worry about re-melting the butter use you can use a light oil such as canola instead. It'll change the flavour a bit but with enough maple syrup and butter on top it shouldn't be noticable.

Something is wrong. Response takes too long or there is JS error. Press Ctrl+Shift+J or Cmd+Shift+J on a Mac.